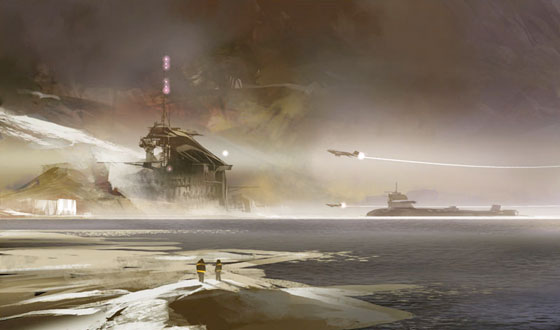 Sparth is Nicolas Bouvier, French art director and concept designer in the gaming industry since 1996. Born in France, he now lives in Seattle, Washington, working for Microsoft, contributing to the future HALO adventures. His influences range from space, to buildings, robotics and beyond. Sparth has contributed to the development of several released games since 1997. Alone in the dark 4 (2001), Cold Fear (2005), Prince of Persia – Warrior Within (2004), and Rage, a project still in developement at IDsoftware, and has participated with Darkworks-Studio, to a lot of game projects in collaboration with large companies like Capcom and Namco. In 2003, he join Ubisoft (Montreal) on their ongoing projects, Prince of Persia Warrior Within, as well as Assassin’s Creed. Then he spent more than three years working for IDsoftware in Dallas. Sparth has also been having an enjoying career illustrating book covers. Lire cet article en Français.