Leon Vymenets creates art that flows with his life’s mantra of simplicity, minimalism and a sense of childlike adventure. His illustrations and drawings are tightly packaged, yet spontaneous and raw. Discover here a nice personality, with a taste for experiment and involved in the Canadian art scene. 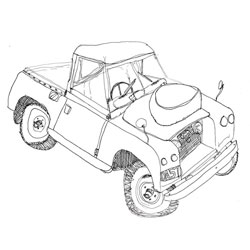 First of all can you tell us about your course: when did you decide to work as an illustrator and what was your first intro to illustration and art?
It was gradual for me, I was always into drawing starting at a young age, and art was always evident in my life – influencing me from every aspect. I remember collaborating on illustrations with one of my classmates as early as grade four. His name was Dave, and he was a great illustrator, somewhat of a prodigy in my opinion when it came to drawing! He totally influenced me, and I never lost that raw fuel to draw.
My mother was also a big influence early on. She was a trained sound engineer and into fashion arts. My mother was always drawing fashion designs, so I think it was in my genes to do something artistic. As a kid, I read skateboard magazines, such as Thrasher Magazine and would just spend hours dazing at the skateboard designs. I was mesmerized by the artwork on them, some of the board designs that I loved back then were the Nattas Panther artwork for Santa Monica Airlines Skateboards (SMA) the Jim Thiebaud artwork also for SMA and the artwork on the Kevin Staab skateboards for Sims Skateboards was so sick – there are way too many to mention. So I think that also played a role for me in becoming an artist/illustrator. Eventually I started my own skateboard company at age 18, which I ran for two years doing everything from the art on the skate decks and tees to hustling that shit to the skate shops. I recently designed a line of skateboards for Vision Skateboards, which is now owned by a local Toronto company.

What do you think is influencing your style?
I was really influenced a while back by these tees that illustrated connections between words and objects or ideas. One example of this type of style is Michael Leons work. This really struck a chord with me. I am really influenced by the physical world around me and urban culture, which is evident in a lot of my illustration work. 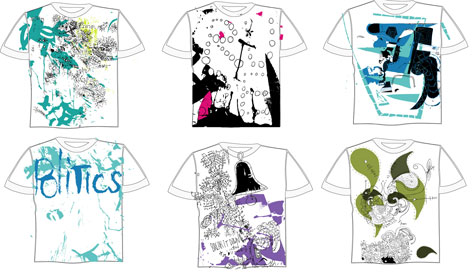 You are known with a raw illustrative style that is a deep trend in type and illustration today but don’t you think it’s kind of old school?
Yeah I think it totally is. For me this is the point. It is raw and subconscious. Its something I don’t think about. I just need to get the idea on paper. It’s something that just comes out from my soul. It represents a strong break from what is a big part of my “professional” life, which is polished digital art work and design. I need it to be raw. It’s like a mental liberation, which allows me to move away from the digital design that I have been typically known for and that represents a large part of professional life.

Do you use a computer a lot?
Six years ago I used to do a lot of digital 3d chaos style artwork and gained a lot of acclaim for that, but have since moved on from that into this more analogue or “old school” style of creating artwork. I do scan in my artwork and play around with it in photoshop sometimes.

I’ve seen a really beautiful fixed gear bicycle on your blog, but shouldn’t you add a brake?
Brakes are good! Especially for street riding. I love riding bikes- it puts me in a meditative state. Fixed gear bikes can be some of the most beautiful things in terms of aesthetics and craftsmanship and I’m really into it on that level. My friends get weirded out by the fact I get excited over something like a nice campagnolo crank or cinelli stem.

What about your work for allmaple? How do you contribute?
I’ve been the editor for allmaple for many years now. I help out in areas such as coordinating the seasonal issues, posting news and events, and I help give Eric Vardon (Allmaple co-founder) ideas with overall strategy of the site and its directions for the future. Allmaple has really grown over the years, and I’m super stoked about the issues we have had in the past. We’ve interviewed some very talented artists and musicians and made alliances with some really awesome people. Allmaple just keeps getting better and that’s why I really dig being a part of it over the years, and the fact we focus our issues strictly on Canadians is great for helping to boost the Canadian art and music scene.

Have you always been living in Toronto Canada? Do you like it, is it a creative place?
Yes for most of my life I have lived in Toronto. I do think that Toronto is becoming a lot more of a creative hub that it ever has been in the past. The city is embracing the arts a lot more as of late with certain events such as an all night art event called Nuite Blanche. The event spans the downtown city core with artwork and installations. We also have dedicated art shops such as Magic Pony and Pixel Gallery/ F13 that strictly focus on art and design.

What do you think about the last 8 years?
I’m glad I got through them with only minor bumps and bruises. 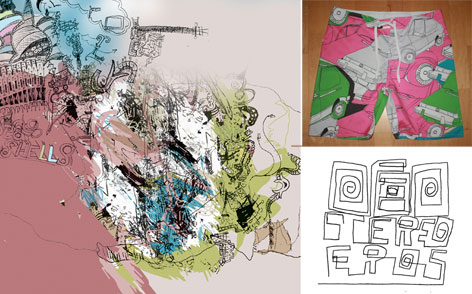 Do you have exhibitions to come, any project for the future?
I recently created some designs for a pair of Rip Curl (Australia) board shorts for their artist based series. I was very stoked to work with them. There should also be an art show to showcase all the artists’ short designs under one roof. I’m also putting out a second edition of new illustrated t-shirt designs for Graniph Japan.
I’m kind of in this state where I’m trying to evolve and add a new dimension to my illustrations. I don’t know what it is yet. I get bored doing the same thing for too long. I rather just stop and switch gears for a bit and go a while with just thinking and doing other things like playing a ukulele and writing songs or get heavy into some other craft. Anything to clear my mind and when I get back at it, it always ends up being a cool evolution to my work.

Music I like: I’m into a lot of folky indie rock style music such as beirut, Robert Pollard, Goldfrapp the list goes on and on and im always searching for new bands/music to listen to. I’m also into a style of hip hop people like to call nerd rap such as MF Doom, Aesop Rock, Deltron 3030 who I would classify as artists that would be put into that category.
Movies I like: Made, 12 monkeys, the fountain, beautiful losers, Helvetica, science of sleep, amores peros, anything by Wes Anderson or Kevin Smith. …
TV shows I like: I love watching Curb Your Enthusiasm and Californication
Artists I like: Thomas Campbell, Barry Mcgee, Daniel Abramovich, Steven Harrington, Michael Leon, Cody Hudson, Lee Misenheimer, Linn Olofsdotter. But of course the list could go on and on.