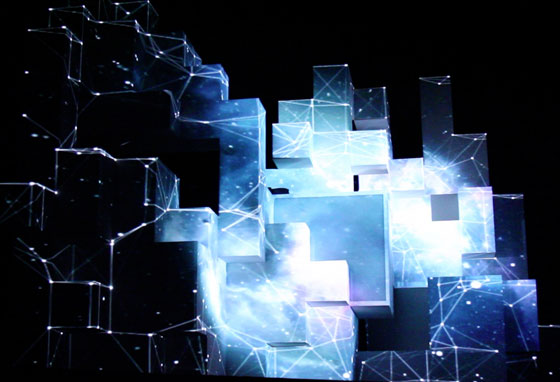 Leviathan is a Chicago-based production studio creating large-scale visual experiences across all media. Since launching in 2010, the studio’s collaborations with agencies, brands and leading filmmakers have resulted in sensational projects across all markets and industries. Leveraging the talents of extraordinary storytellers, software developers, producers and artists, Leviathan develops cutting edge content that maximizes the greatest capabilities of today’s media platforms, from broadcast to experiential installations.
Leviathan in conjunction with V Squared Labs (VSL) contributes to the acclaim of Amon Tobin‘s live tour supporting his new Ninja Tune Records release entitled “ISAM.” The use of real-time projection mapping and generative, audio-reactive graphics, mixed with traditionally rendered media creates one-of-a-kind experiences for each audience. “A live 3D camera feed of Amon is distorted with effects and projected onto the structure’s facade, over the pre-rendered animation,” explained executive creative director Jason White. “The result is quite unbelievable, and in fact, every aspect of each performance is custom tailored for Amon to be able to deliver amazing, one-of-a-kind performances. This project is really a perfect fit for Amon, VSL and Leviathan: The perfect blend of cutting-edge technology and progressive sound, design and animation, in the hands of one of the most phenomenal musical artists of our time.” (see a preview of the show below)